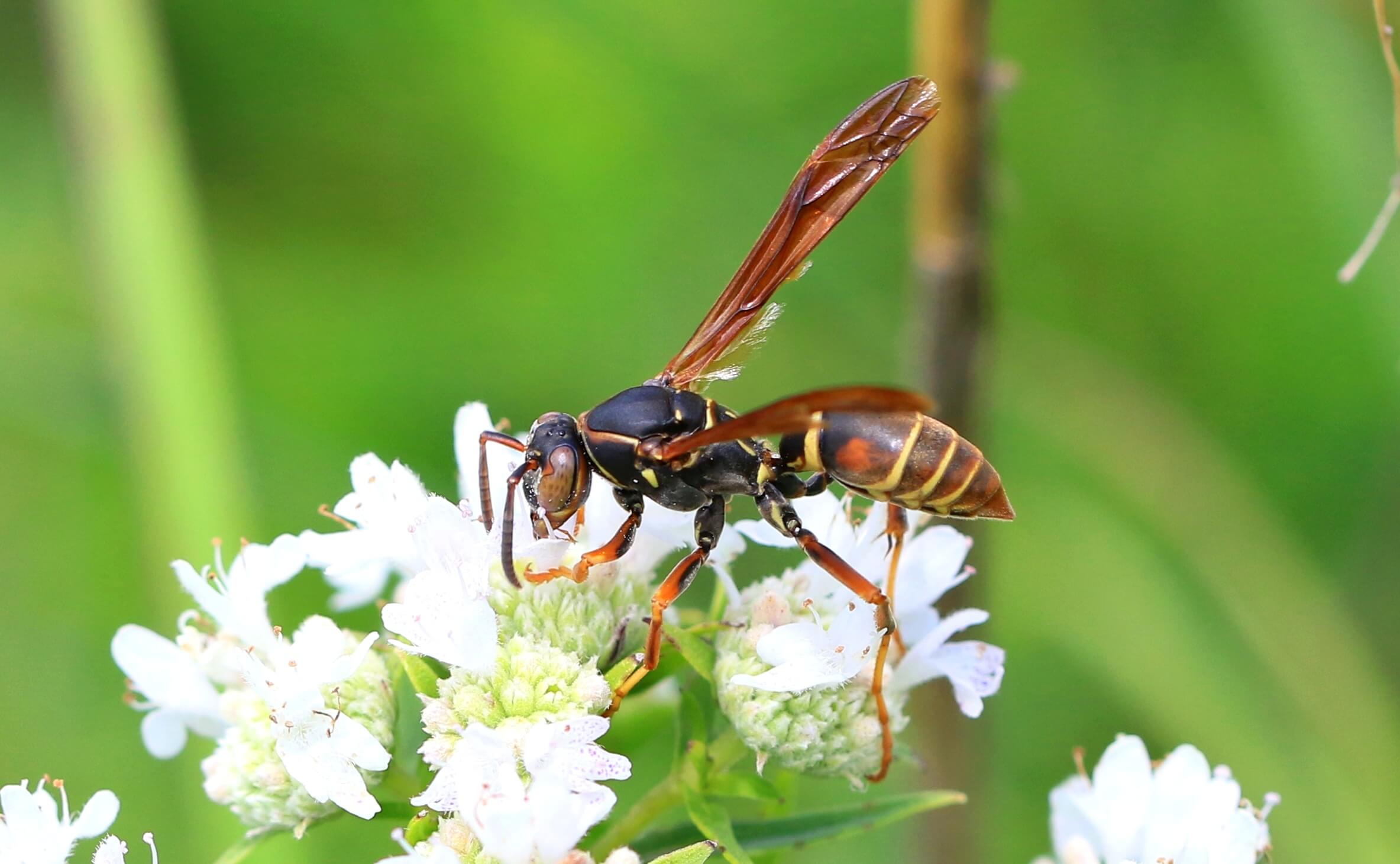 A few weekends ago, I decided to tackle some of the weeds choking out the shrubs along my house foundation. Not three minutes into the chore and I was running away, with one yellowjacket sting already and another to follow despite my frantic dash across the yard. A few days later I was hit again—this time by a bald-faced hornet—because I got too close to the hummingbird feeder it had clearly claimed as its own.

But I’ve weeded that bed and walked by that feeder plenty of times. Why the sudden stings and what do I do about them?

Yellowjackets, bald-faced hornets, and paper wasps are, in general, the stingy, stripey flying insects you need to worry about this time of year. There are loads of other wasps, hornets, and bees out there—including many that appear pretty terrifying—but the vast majority of stings will come from these three.

These wasps, all of which are considered “social wasps,” live in colonies where each individual has a designated job during its relatively short life. The colony begins in late spring, with the emergence of a queen who has just survived the winter by hibernating under leaf litter or in a tree cavity.

The queen shakes off the winter and immediately begins building a starter nest, laying eggs, and caring for the first brood of larvae to hatch by gathering food like caterpillars and insects and scavenged meat.

The entirety of this first batch of larvae—and almost all the wasps the colony eventually produces—will become non-fertile female workers that do the work that keeps a colony ticking: building, repairing, and protecting the nest; gathering food; and feeding and caring for the colony’s offspring. The queen is left to focus on her important job of laying more eggs.

Bit by bit, the colony grows over the summer. By late August, the colony has reached its peak size, which can be enormous; yellowjacket colonies can number as many as 5,000 individuals.

At this time, an important shift happens in the queen’s egg laying, most likely triggered by the shifting daylength. She will now lay two new kinds of eggs: one that will produce fertile females capable of laying eggs and becoming new queens, and another that will produce male drones, the first male wasps the colony will have produced since it began in the spring.

The fertile females and male drones will leave their nests to congregate in common mating areas, after which the females disperse and eventually find a cozy place to hibernate for the winter. Come spring, she will emerge as a new queen to start her own nest. The old queen, the male drones, and all the female workers will die with the arrival of cold weather.

Paper wasps, bald-faced hornets, and yellowjackets all make their nests out of wood fiber they chew into a papery pulp.

Paper wasp nests are small and umbrella-shaped with visible hexagonal brood cells. They are often attached under roof overhangs but can also be tucked into nooks and crannies on playgrounds, benches, or machinery.

Bald-faced hornet nests are large, swirly, grey balloons with a single opening at the bottom, generally attached to tree limbs or utility poles.

Though yellowjackets occasionally build stand-alone hanging nests, most of the time they use existing openings like underground animal burrows, tree cavities, or the insides of walls. Often, the only way to spot a yellowjacket nest is by finding the entry/exit hole.

The inclination of wasps to protect their nests, coupled with the fact that colonies in late summer are so huge, is what makes them so potentially dangerous.

Disturbing a nest—as I did when pulled weeds too close to the yellowjacket nest by my foundation—is the best (or worst, depending on how you look at it) way to get stung. Wasps can not only sting repeatedly and track threats as they leave the nest area but will also emit pheromones that call other colony members to join their attack.

If you have a nest in an area that you do not use, the best thing to do is leave it alone and give it a wide berth. If the nest is in an area that cannot be avoided, you may elect to use an insecticidal control method or call an exterminator.

Don’t bother stomping on yellowjacket nests to “plug” the entrance hole. They will simply burrow their way out and they’ll be plenty ticked off when they do.

If you want to use a wasp trap, be extra cautious with how and where you use it. Traps work by luring wasps in with a tantalizing scent. But they will lure wasps in from far away, so they could just bring in more wasps than you were originally dealing with. Always place traps so they are luring the wasps away from where you want to be. In other words, if you want to keep wasps away from your picnic table or front door, don’t put a wasp trap there.

This time of year, wasps are transitioning away from the need to hunt insects and caterpillars and are looking for easy, sweet foods, which is why they are attracted to sugary drinks, garbage, or rotting food. Removing these food sources will go a long way in helping with wasp problems.

Finally, keep in mind that despite their painful stings, these wasps are integral parts of our natural ecosystems. They help to control other pests like biting horse and deer flies; they are effective pollinators; and they serve as food for birds and other animals. So, control them as needed to avoid stings, but avoid and leave them be as much as possible.

Above: A paper wasp

Below: A bald-faced hornet nest 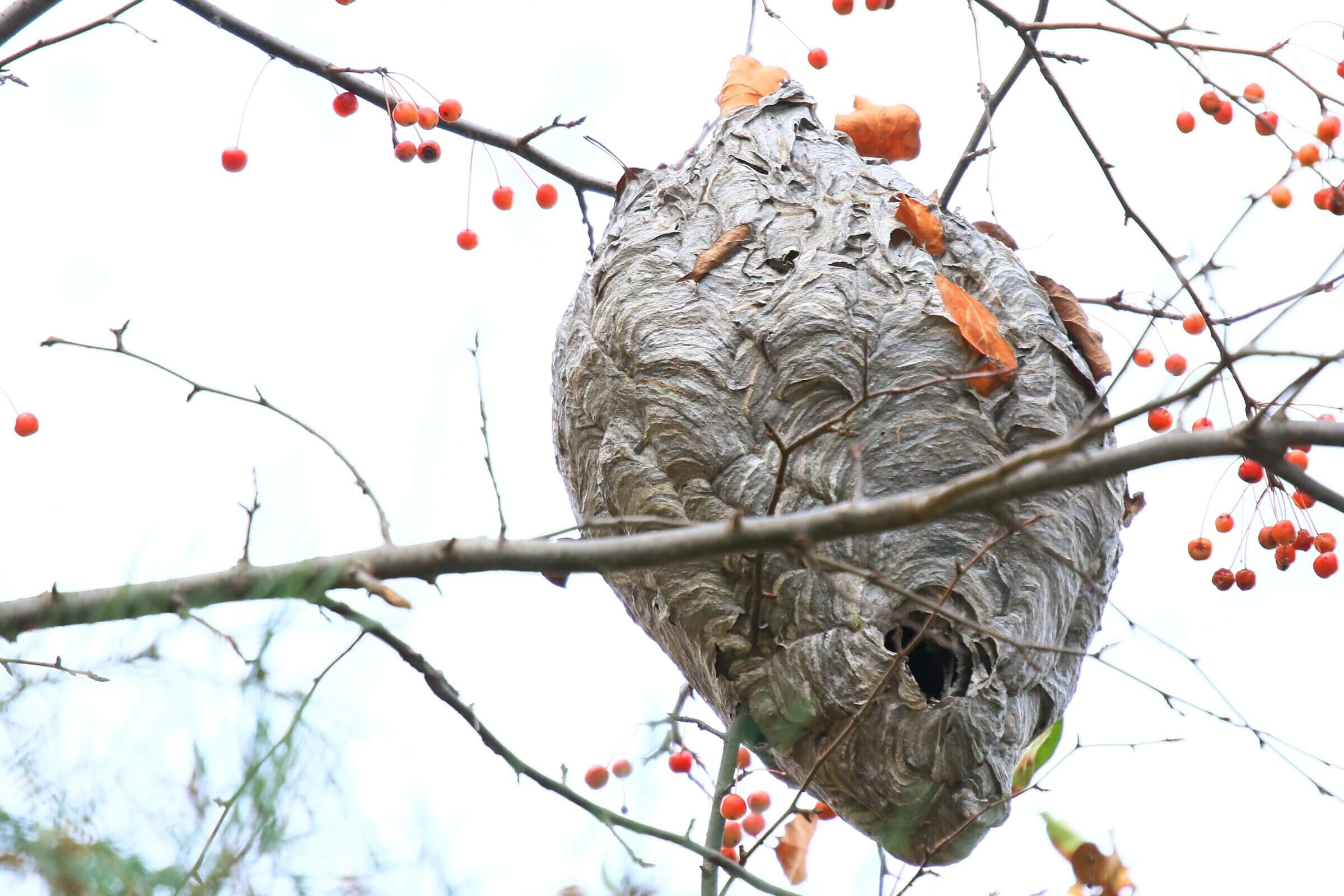